The Club celebrated its 20th Anniversary in May.  Apart from a hiccup with the powerpoint which refused to work after a helpful chap messed with the cords but apart from that it was a lovely evening of reminiscing.  13 of the 22 Charter Members attended and of those 7 are still current members. Also present were 13 of the past 15 Presidents (see photo below).

Many thanks to Cathy Morato our Charter President who was the MC for the night and entertained  as only Cathy can. No wonder the Club got off to a wonderful start with Cathy as President. She shared many memories of her 2 years in the chair as did Beth Honeycombe and the lasting impression for both ladies of the first years was FUN.  The Club was given some very important advice early in club life from former International President and then
Governor of Queensland Leneen Forde AC and that was to get to know each other and have fun.  Club members certainly did that.

Initially Club members had no idea what they were doing in those days but 20 years on the Club Members have made their mark in this district and internationally with donations to women in poorer circumstances than our own. Whilst we are only a small number of women locally, collectively on an international stage we do make a difference and that is an important aspect of our clubs.

Club members were joined on the night by 4 Townsville members and hopefully all present had a wonderful night. 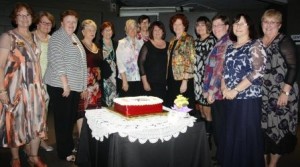